Hello, my name is Woody Goulart and I am an advocate of listening to the voice that you hear in your mind. This voice has no sound anyone can hear. This voice cannot be observed or measured by a medical doctor or a scientist directly. This voice is not even physical.

Watch a five-minute video about the importance of mind voice…

Listen to “Owner’s Manual for Your Mind” (Audio Recording)

— This is an audio recording (MP3 file) which is a blunt commentary in my own voice expressing my opinions and sharing what I have learned on the subject of mind voice. This audio recording is provocative and is not for everyone.

If you listen you will hear how to be the boss of you and discover ways you can think for yourself. This recording includes an uncensored perspective using explicit words to describe the devotees of Donald Trump and actions in Washington, DC on January 6, 2021 in which they were involved.

You should not listen to this audio recording if you are someone who finds it challenging to hear blunt language or proven strategies to allow you to think for yourself.

So What Exactly is Mind Voice?

You are not imagining things. That voice is really there.

I can explain this concept of mind voice easily. Here is my own personal and professional perspective, advice, and guidance on this crucial mental health aspect presented in a short, simple, easy-to-understand short YouTube video.

You can benefit from reading my down-to-earth book available electronically for downloading instantly for $19.99 from Amazon. The title is Mind Voice: All You Need to Start Using Your Mental Powers. This one book has a great deal of in-depth guidance from me to improve your life. 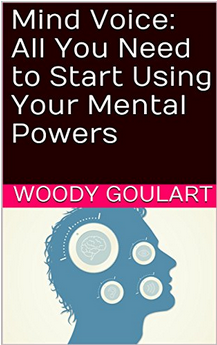 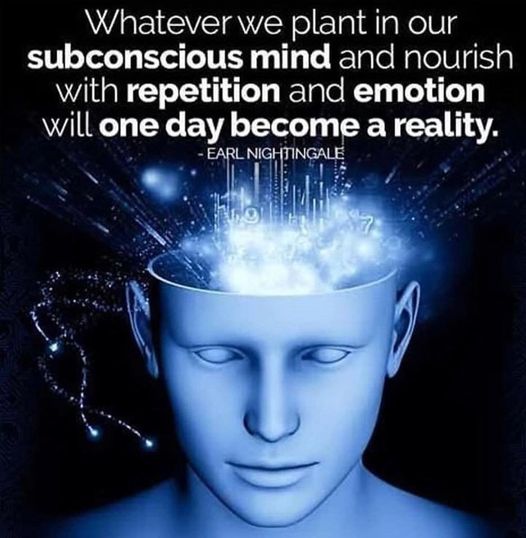 I published Mind Voice: All You Need to Start Using Your Mental Powers originally in 2018 and then updated it in 2022 following what happened on January 6, 2021 in Washington, DC. What happened was the seat of our government’s legislative sector was angrily and violently breached by devotees of Donald J. Trump. In his final days as the 45th president (before Inauguration Day took place) Trump spoke out (in a podium speech outside the White House) to persuade his followers to go to Capitol Hill and do what they needed to do to stop the normal legislative processes going on there. This is a stunning example of an authoritarian manipulating how groups of people think and behave.

The solid proof that something incorrect is happening in your life and in your mind easily can be found in admitting the ongoing anger that you feel. People who know how to use their minds well and for healthy outcomes do not invest in stoking the mental energy that gets them stuck in enduring and ongoing anger. There is nothing “wrong” with anger, of course. But if you are angry every day, that should be a wake up call to you that you need to address what’s going on between your ears. Your mind voice is yours to put to positive use if you wish.

You can choose to rely upon your mind voice to hear and believe what you have chosen deliberately for yourself. What you put there into your mind for yourself can and will result in you acting towards pro-social and positive outcomes.

You do not have to hold in your mind the energy to produce anger or generate violence or result in death to anyone out in the physical world including yourself.

The reason I wrote this book was to share with you what I discovered about built-in mental powers inside all of us that enable us to upgrade our lives to live without fear while having good mental health. If you prefer to live in fear, hate, anger, and enjoy violence, you own that, too. You deserve better than that, but you have a way out of your problems if you just pay attention to what I have written in this book.

What I do professionally is provide life and business guidance, coaching, mentoring, and training for people to bring out what they’ve got inside and guide them in how to use that to get what they want in their life.

My book is for everyone who wants to learn how to manage their own mind and live without fear and with good mental health. I call it mind voice but there are other names such as the mental equivalent which comes to us from nearly 80 years ago. Ancient wisdom about this built-in mental power we all have is ours from centuries ago. Roman Emperor Marcus Aurelius wrote, “You have power over your mind – not outside events. Realize this, and you will find strength.”

Based on the Carl Sagan novel, Contact is a favorite science fiction film of mine released 25 years ago. This film turned out to be unlike any other from Hollywood before or since. Read more here: https://www.vulture.com/2022/06/an-oral-history-of-contact-the-movie.html

“Westward Ho” was a phrase I’d heard way back when I was just a boy growing up in a small California town. My youthful curiosity led me, of course, to seek truth and answers that were readily available to me in comic books at the barber shop. I concluded that “Westward Ho” was proof positive that a kid could grow up to fight pirates on the high seas. I wanted to do that! I also felt a deep attraction to the profession of storytelling using text and images. Seeing and enjoying those comic books such as “Westward Ho” at the barber shop as a young boy motivated me to grow up and create those kinds of stories to share with others.

I was 6 years old when I saw a Walt Disney movie called Westward Ho the Wagons. That movie along with other Walt Disney media content in those days completely changed my outlook on life. I grew up believing that “Westward Ho” affirmed how even a small-town kid from California could grow up to be a cowboy if that’s what he aimed for. I wanted that for myself!

Well, I never became a cowboy. I managed instead to grow up to become a storyteller. First, however, I needed to realize that a guy certainly can put on a cowboy hat and cowboy boots at any point in his life if he so chooses, but being a cowboy is not the most simple way for a man to make a living in the adult world. Since I already lived in the West, I did not feel any need to make a life journey there, whether I became a cowboy or something else.

Life changes and people often do not stay around where they were born. I attended graduate school starting in 1974 in Arcata, California (Humboldt State University) and went on to earn a doctorate in 1978 from Indiana University at Bloomington. While I was living in Indiana I met a woman whom I married in 1978. Big mistake. I divorced her in 1990 and relocated back to the West. I lived in Arizona, Colorado, and Nevada for several years before I accepting a job-of-a-lifetime opportunity in 1995 in Washington, DC.

By 2012 I had lived and worked in the Washington, DC area for nearly 20 years. That was the year that I recognized how I felt a very strong “call of the West” tugging at me to return home.

The space shuttle Discovery was decommissioned that year and flown by NASA on the back of a 747 to become a permanent exhibit at a federal air and space museum near where I lived at that time with my partner, Sam. He was born in Washington, DC in 1960. We met in our nation’s capital in 1996 and started a relationship that has continued ever since. On April 17, 2012 the Washington, DC television channels interrupted their normal programming. It was a rare and pure moment for me. The news coverage that day happily was not about terrorism or death or partisan political wrangling on Capitol Hill. For me, that day turned into a very childlike celebration of something odd. Flying overhead that day was an aircraft that none of us on this planet would ever see again in our entire lives. I felt a deep thrill to photograph that decommissioned shuttle atop a jumbo jet low in the air over Tysons Corner, VA on its final flight. 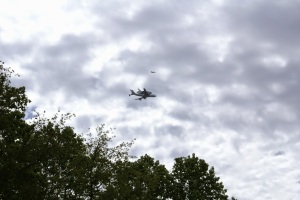 I seized upon that obvious “flying West” metaphor and decided in 2012 that I Sam and I needed to leave the Washington, DC area so that we could relocate westward and restart our lives in a different place.

I’m sure it is blatantly immature for a grown person to become motivated by bad weather to make life-changing decisions. But, it was real easy for Sam and me to imagine the warmth of the desert sun when our apartment parking lot was clogged with deep, thick snow.

The West was the best. That’s what I thought. Where else in this whole wide world could you walk down an alley in your small California hometown and photograph your partner shooting pictures of buggle gum stuck to the bricks?

Las Vegas, Nevada was the choice we made for a western venue where we would live starting in the Summer of 2012. We got married in Las Vegas a few years later.

You can choose to ignore the sudden thrill of winning at a Las Vegas casino slot machine. However, when you become a local living in Las Vegas, you enter a world of experiences that you otherwise would never find anywhere else in your entire life—such as learning how not to live in a flood zone.

You just need to glance casually out the window while riding a crosstown bus in Las Vegas to catch a glance of most unique architecture.

When you do as local do and visit the downtown Las Vegas “First Friday” festival of food and drink, just pretend not to pay any attention whatsoever to that big sign advertising nude daily strippers across the street.

If you know where to look, you can discover readily that there can be “sinfully good” food for you in Las Vegas.

You probably can photograph just about anywhere in Las Vegas and have the shot turn out looking like you knew what you were doing with that camera. 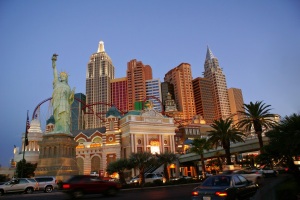 Sometimes in Las Vegas you very easily can get caught off guard by what’s been created for the entertainment of visitors.

If nothing else is true, Las Vegas is one of the most visually and emotionally stimulating places in the entire United States. Once you have lived in Las Vegas you will learn the truth that you can make a life for yourself here if you use your wise and deliberate choices and maintain a purposeful outlook on your life.

Surviving a Career Transition Desert
For those of you who have never lived in a desert, you just have to trust me when I tell you: The rules for survival of life in a desert are very different from everywhere else. My desert living exper…

Listen to The BAT

I invite all of you who currently are seeking opportunities to check out my online column about how to "stand out" compared to others. Fresh how-to advice and tips are posted each week at Ned Lundquist's Job of the Week website.

Do we really need 8 hours of sleep?

The myth of the eight-hour sleep
Sleeping in one eight-hour chunk is a very recent phenomenon, and lying awake at night could be good for you, according to scientists and historians.

This one is a must-see Kevin Smith film!

Our use of media to communicate is complicated.

Our Media, Ourselves: Are We Headed For A Matrix? : NPR
We're streaming our video, downloading our books and doing away with the hard copies that used to help communicate our personalities to one another. Bob Mondello points to a surprisingly early vision …