In this section of my website you will find images from the 1960s of what was then known as Mission Central Catholic High School in San Luis Obispo, California. (See the school history here.)

Learn about The Sisters, Their Habits, and Their Hollywood Connection. Explore students newspapers from Mission High School in the 1960s.

Special thanks to Thomas J. Schum for producing the digital versions of these images so that I could share them with you online here.

After nearly 30 years of never having attended one single high school reunion in San Luis Obispo, I was contacted out of the blue by Thomas J. Schum. At that time, I was 3,000 miles away from San Luis Obispo living and working in the Washington, DC region. It turns out that Tom happened also to live in Northern Virginia as I did. So, we reconnected in person in 2007.

Before he met me at the agreed upon location in Arlington, Virginia, Tom assured me over the phone that he would recognize me as an old guy. He said he had pictures of me. I told him not to rely upon those because I had stopped coloring my hair. He probably thought I was in witness protection. Eventually, Tom put together what he called a micro reunion in the Eastern Time Zone with fellow Mission high school alums, Anne Madden and Mary Nimmo.

At a Washington, DC restaurant on Pennsylvania Avenue, we all had many laughs and recalled memories that we believed certainly had faded with the passage of so much time since we were kids in San Luis Obispo.

Tom and I remembered how we served on the student newspaper staff together with several of our Mission high schoolmates. If you look carefully at the 1968 photograph below, you may be able to recognize some of us from back in the day. Tom said that he thought I must be a hoarder because I saved ancient artifacts that we once knew as our student newspaper and high school yearbooks.

In the glorious 1960s when we were teenagers, we all endured mortifyingly embarrassing high school moments that shaped who we became as adults.

My parents were loving, yet apparently also cruel. One piece of damning evidence I have regarding Ed and Evelyn’s curious choices in raising me in the sleepy little town of San Luis Obispo is that they compelled me to take accordion lessons and watch The Lawrence Welk Show each week on television for inspiration.

Apparently, this parental brainwashing exacted a deep toll upon me. I found this photograph from a Mission high school talent show inside one of the yearbooks that Tom said I had hoarded. I don’t remember participating in any high school talent show. Nor do I remember when this photograph was taken. I guess that’s me with the dreaded instrument strapped to my chest. Hysterical amnesia is a terrible thing. And, no surprise, I never grew up to be a professional musician.

Even after many decades, I still consider Richard Tietje, my favorite teacher from Mission high school, to be one of the most formative influences upon my life: 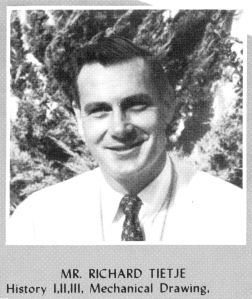 You just may find that you can recognize some of these young people with strange hair styles from photographs taken 50 years ago:

19 thoughts on “Mission Central Catholic High School in the Sixties”